The last two Sundays I have spent at The Place in London rehearsing Sir Kenneth MacMillan’s ballet Sea of Troubles. This innovative late work was made in 1988 for the independent ballet company Dance Advance, led by Michael Batchelor, Jennifer Jackson, Sheila Styles and myself. As aspiring choreographers we broke away from the Royal Ballet companies to make new ballet based work, using 20th century and live music, performing in a range of smaller, more intimate venues round the country, reaching new audiences. For our first programme we asked MacMillan if he would make something for us; he responded with an experimental take on Shakespeare’s Hamlet, designed by Deborah MacMillan, and set to chamber music by Webern and Martinu played live in performance by the ensemble Quorum. We toured extensively in southern, south-eastern and eastern regions of the UK, culminating in two performances in the Queen Elizabeth Hall on London’s South Bank. The piece later toured to Madrid, the Canary Isles, Bonn and China, and a short documentary was made about it by Anglia Television, featuring interview with MacMillan and extracts performed by the original cast: Michael Batchelor, Susie Crow, Jennifer Jackson, Russell Maliphant, Stephen Sheriff and Sheila Styles. Sea of Troubles subsequently entered the repertoire of Scottish Ballet and was also performed by an ensemble led by Adam Cooper.

Sea of Troubles is now being revived by Yorke Dance Project as part of their new programme Inspirit (also featuring works by Robert Cohan, Yolande Yorke-Edgell and Charlotte Edmonds), which will be previewed at the Clore Studio at the Royal Opera House on 11th March, and will tour in autumn 2016. MacMillan’s barefoot work, which the choreographer intended as a fusion of ballet and contemporary dance, has been taught from the original Benesh notation taken at the time of creation by notator Jane Elliott. I have been drawing on my embodied memory to inform and rehearse an exciting cast who are developing powerful new interpretations.  Wonderful to see this dramatic work, its fractured narrative full of insight and memorable imagery, coming alive once again. Here are some photos taken of the rehearsal process by Yolande Yorke-Edgell. 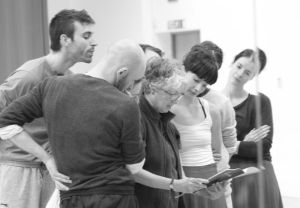 And about Yorke Dance Project’s programme and activities here.

Dance Advance archival material can be accessed through the National Resource Centre for Dance at University of Surrey.