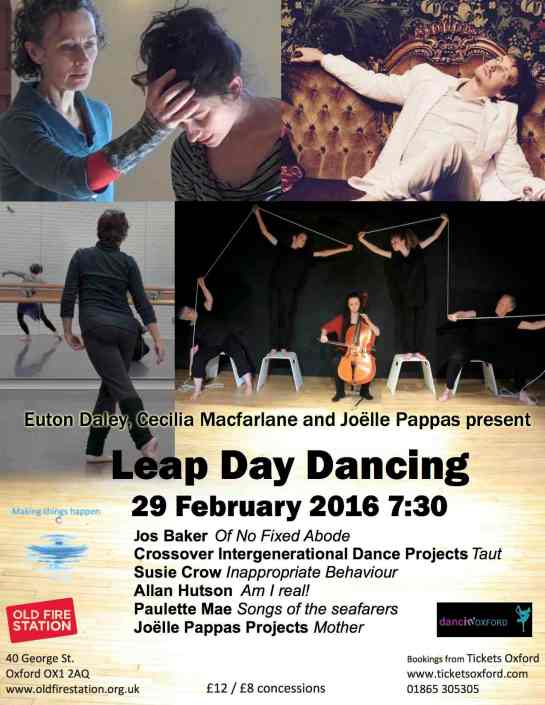 Late last year I felt honoured to be approached by two of the Oxford dance scene’s most respected figures, Cecilia Macfarlane and Joëlle Pappas, with an invitation to present work at Leap Day Dancing at the Old Fire Station during the 10th anniversary edition of Dancin’ Oxford. This platform, aptly named for its Leap Year’s Day performance date of 29th February, curated by Cecilia and Joëlle with producer Euton Daley, offered an alternative to the Festival’s regular Moving With The Times programme at the Pegasus Theatre where selected choreographers receive support (mentoring, studio and theatre space, work in progress showings) to present new works which relate to the platform’s titular theme. Leap Day Dancing by contrast brought together a collection of new and existing short studies and completed works from Oxford dance makers; and serendipitously revealed connections between the artists, and themes which gave meaning to apparently disparate contributions, making for a touching and satisfying event which revealed and reflected particular characteristics of Oxford’s idiosyncratic dance culture.

I was unable to present live work for this occasion, but was able to represent recent creative activity through the showing of my improvisation for Sonia York-Pryce’s research project into mature dancers. Filmed in January 2015 this was one of 8 improvisations by dancers in the UK and Australia which Sonia had ultimately edited into an atmospheric and prize-winning compilation, Interprète/Inappropriate Behaviour. I had very much enjoyed the process of working from Sonia’s original movement material and felt happy with the resulting interpretation that she captured in the moment – and aware that I would never be able to reproduce it. It felt especially comfortable to show this brief film study alongside work created by other mature women such as Cecilia and Joëlle, and within a programme which included powerful live performances by mature dancers including Cecilia herself and LIzie Saunderson (Giraudeau).

Another connecting theme was the use of film; not simply as documentation and portrayal of dancing, but also as providing a visual counterweight to live performance, as in Joëlle’s Mother which opened the evening, where emotive dancing was given added power and significance when seen in relation to dramatic footage of devastating forest fire; and in Alan Hutson’s solo Am I Real? a passionate meditation on the idea of objects having a soul, poignantly referencing the ballet Petrushka (an unexpected balletic echo here). A particular web of connections was revealed between artists of different ages, an area of work which has been strongly developed in Oxford over the years, where established teachers such as Cecilia and Joëlle are now teaching the offspring of former students. This intergenerational practice was overt not only in Mother but in Taut from Crossover Intergenerational Dance Company which concluded the evening, in which a literal web of white threads connected two pairs of dancers, one young, one older, with the public, as they explored playful, sometimes conflictive, sometimes tenderly affectionate relationships between them. But it was evident throughout the evening; with the contribution of guest dancer Jos Baker now making an international career as a contemporary dancer, but who started his training with Oxford Youth Dance before going to the Laban Centre in London; and the appearance of two talented young contemporary dancers on the threshold of dance careers whom I know from my ballet classes; Melissa Bori performing for Joëlle alongside Lizie with whom she has also studied, and current Oxford Youth Dance member Charis Taplin in Taut.

Research provided a further thread of connection, as Jos, self-confessed “movement nerd”, animatedly shared his developing ideas about moving through fluent talking and dancing; and I in academic presenter mode introduced the research process that had lead to my improvisation. Finally a word about musical content, which ranged from Benjamin Britten’s massive and tragic Lacrimosas from his Sinfonia da Requiem and War Requiem for Mother, to the quietly true voice of Paulette Mae singing live above soft ambient rustlings in her enigmatic solo Rain; and in a further unforeseen arc Bill Ryan’s minimal but harmonic cello, which set the contemplative tone for Inappropriate Behaviour, presaged the resonant and moving contribution of local cellist Jacqueline Johnson in Taut.