There are numerous links embedded in this piece; scroll your cursor over the text to find out more…

A year ago I didn’t manage to write a review of 2018; which had ended momentously with the wonderful winter wedding just before Christmas of my daughter Joanna and her man Dan.  A very happy occasion with much laughter and song; and the talents of dear dancer friends from Sadler’s Wells Royal Ballet days were visible in the bride’s beautiful dress from Ritva Westenius, now headed by Chenca Williams, and gorgeous floral arrangements by Covent Garden’s go-to florist Bloomsbury Flowers run by Stephen Wicks and Mark Welford.

Building up to this special family event had shaped a year otherwise spent in regular teaching but also academic activity; beginning in January with a lecture for the History of Performance Course devised by the admirable Jane Pritchard, Curator of Dance at the Victoria and Albert Museum which houses the former Theatre Museum collections. ‘Dancers, audiences and spaces: reflections from practice’ had been originally presented at a Dance and Academia event in Oxford programmed by Miranda Laurence.  It drew on my own experience as a dancer in considering different spaces for dance and their effects on the relationship between performer and audience.  In April the more theoretical side of my doctoral research had its first outing in a paper ‘The ballet class: oral tradition and embodied learning’ at the Society for Dance Research’s conference evocatively titled ‘Dance in the Age of Forgetfulness’.

As the PhD writing process intensified I did nevertheless find time for two fascinating and stimulating excursions abroad for dance scholarship and pedagogy events.  In March a mad one-day trip to Paris with colleague and Cecchetti expert Julie Cronshaw took us to the venerable Centre de Danse du Marais for a study day organised by Katherine Kanter of the Société Auguste Vestris on “Difficultés Techniques du Grand Adage”.

This intensive afternoon included two illuminating master classes in different styles. The first led by the elegant former Paris Opera Ballet étoile Jean-Guillaume Bart, focused on three studies, first a port de bras and then two beautiful adages of increasingly complexity, exemplifying the modern French school, with its geometric clarity in articulation of line and direction.  Back in Oxford I later taught some of this material, which is richly demanding and enlightening to experience. In thought-provoking contrast Elisa Corsini, Italian teacher at the prestigious Hamlyn School in Florence, then taught Cecchetti enchaînements, and an adage of fiendish difficulty; while this was authentic material incorporating old fashioned grace and expressive gesture we were struck by the modernity of its off-centre use of the body requiring great strength, control and technical mastery.  Respect to the young dancers from Paris, Germany and Italy participating in these sessions for their intelligent engagement in dancing some of which would have been completely unfamiliar in its tradition and aesthetic.

Lively discussion ensued from those watching, including vigorous debate about variants in ballet terminology.  How stimulating to hear teachers from different ballet teaching traditions coming together to share insights on a common topic and discuss their different approaches; reflecting after I could not think of a similar event in the UK, where study days are usually hosted by particular teaching institutions each expounding their own methods and schooling uncontested. 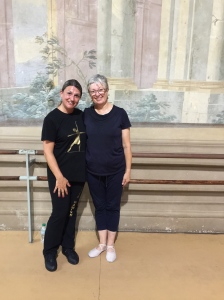 Susie with Elisa Corsini after class at the Hamlyn School

I came across Elisa Corsini again in July when Jennifer Jackson and I attended the annual conference of CORPS de Ballet International, an American organisation dedicated to supporting teachers of ballet in higher education.  Based in a comfortable hotel in the centre of Florence, teacher members of this friendly professional body came together for a packed and fascinating programme of scholarly papers and discussions on style, technique and legendary teachers in the mornings, with hugely enjoyable evening workshops in historical dance from the Renaissance to the Baroque.  An afternoon Cecchetti class with Elisa Corsini in one of the studios of the atmospheric frescoed palazzo setting of the Hamlyn School was a great opportunity to experience for myself Cecchetti material, and find unexpected familiarities within its precisely detailed port de bras.  Jennifer and I were warmly welcomed as the potential pioneers of a British chapter of CORPS, and I look forward to keeping up with this lively body of practitioner scholars in ballet.

These events focused on ballet in the studio fed fruitfully into my research thinking; but an exciting project commencing at the end of 2018 brought attention back firmly to ballet’s theatrical and choreographic contexts. Following the success of the revival of Kenneth MacMillan’s Sea of Troubles Deborah MacMillan had given Yorke Dance Project her blessing to undertake revival of another lesser-known and controversial work from a decade earlier as part of their 20th anniversary programme.  Playground, set to a powerful orchestral score by Gordon Crosse, was originally created by MacMillan for Sadler’s Wells Royal Ballet in 1979; it premiered at the Edinburgh International Festival.  Its uncompromising and disturbing subject matter was strong meat for some at the time, and the work did not stay in repertoire after performances at Sadler’s Wells and on tour.  The challenge of remounting this forgotten piece was considerable; not least as it involved an ensemble cast larger that Yorke Dance’s streamlined team of 8 dancers.

Painstaking reconstruction was effected from blurry video and notation by notator Jane Elliott; and Stephen Wicks and I who had both been original cast members were called in to coach the dancers and vocational students drawn in to swell the company’s numbers.  Over this period I greatly enjoyed teaching company class, and the challenge of devising enchaînements aimed to prepare dancers for the particular characteristics of MacMillan’s distinctive movement palette.  The revival was premiered at Pavilion Dance South West in Bournemouth at the end of January 2019, a tour of regional venues culminated in performances in May in the Clore Studio at the Royal Opera House; emerging as a powerful work resonating with today’s concerns about bullying and mental health, Playground was met with critical and audience acclaim.  The DANSOX Conference Kenneth MacMillan: Making Dance Beyond the Boundaries hosted a packed lecture demonstration about the revival process presented by myself with Yolande Yorke-Edgell with dancers from the company.  You can read my account of the process of revival here.

No sooner Playground on than the clock was ticking for finishing my thesis.  I had entered “writing up” in September 2018 and had a year to get it in. My optimistic original deadlines slipped, but I managed to present a first complete draft to my supervisors in March; and with relief enjoyed a much-needed holiday with Pete in Japan contemplating the cherry blossom. Following rigorous and challenging feedback in May redrafting continued. The first DANSOX Summer School in July was a vibrant three days of stimulating scholarship and practice in combination programmed by Professor Susan Jones of St Hilda’s College Oxford and featuring lectures by Alastair Macaulay on Petipa, Balanchine and Cunningham, as well as the launch of Nadine Meisner’s magisterial biography of the great Marius Petipa.  In the final stages of clarifying my conclusions the Summer School provided a valuable opportunity to present some of the emerging thinking alongside pianist Jonathan Still, himself in the final stages of his PhD on music in the ballet class, and we drew on wonderful and willing dancers from Yorke Dance Project Ben Warbis and Eleanor Ferguson for a demonstration class exploring the relationship of dancing and music and its technical and creative implications.  You can read Nicholas Minn‘s account of the DANSOX Summer School here.

At the end of the summer I took time from editing to attend with Ségolène Tarte the annual Back to the Barre course taught in Guildford by Anya Grinsted, whose work with vocational students I had observed for the research.  A valuable opportunity for us both to experience in personal practice the Audrey de Vos inspired conditioning work that precedes and influences Anya’s classes, and we had much stimulating discussion in the car there and back.  As the autumn progressed it was also a last chance to celebrate an auspicious anniversary; 10 years of existence of Oxford Dance Writers.  This blog encouraging writing and informed debate about dance had emerged alongside Ballet in Small Spaces‘ The Solos Project at the Burton Taylor Studio in January 2009, to generate reviews and discussion of the work of Oxford based dance artists, and to raise the profile of dance in a city where there is great enthusiasm for dance, but with activity happening largely below the radar of public attention and support.  Over ten years the site has developed into an extensive archive of Oxford’s dance history, and a go-to site for information about dance events and reviews.  It seemed important to celebrate this and look forward to another decade; you can read an account of this happy occasion here.

My thesis ‘The Ballet Class: Educating Creative Dance Artists?’ was submitted for examination on 20th September 2019; my viva to defend it took place on Monday 16th December.  Professor Christopher Bannerman was the external examiner, and dance philosopher Dr Anna Pakes the internal Roehampton examiner.  My supervisor Dr Geraldine Morris was in attendance representing the team of herself and my Director of Studies Professor Emilyn Claid; I am immensely grateful to both for their support and advice throughout my six years of study.  An hour and a half of rigorous questioning followed by a nail-biting 40-minute wait – but the thesis passed with minor corrections to be submitted within three months, so I emerge into 2020 as Doctor Crow…

In a year of massive political upheaval I have often wondered as to the relevance and value of spending so much time in consideration of the minutiae of aspects of the ballet class, its details of timing and intention in fragments of movement, when so many other urgent issues surround us.  Yet I remain convinced that there is a great morality and a creative education far beyond mere physical training to be found in committed engagement with the experience of ballet’s danse d’école.  Warmest thanks finally to all those in my classes who cheered on my study and tolerated my thinking out loud, providing a trusting environment in which to develop these ideas about ballet’s teaching in practice.

With all best wishes for a new year – and the coming decade,